Adding Structure to an XQuery Comparison 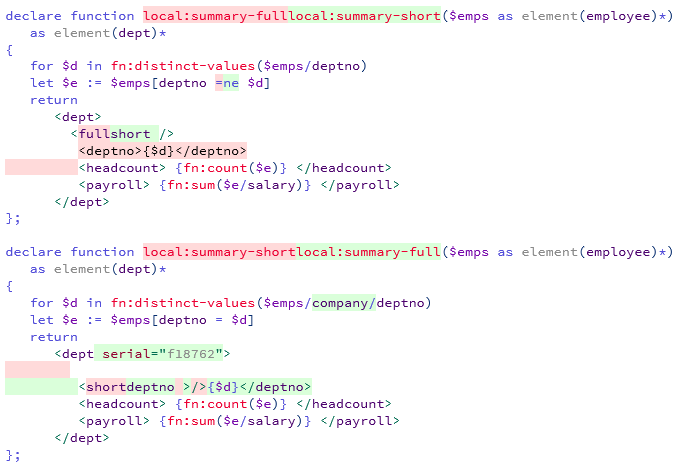 In my first post on Comparing XQuery with DeltaXML Core, we used a flat sequence of span elements, where each element represented an XQuery language token, with a class attribute showing the token type. Whilst this proved simple and effective, in this post I take things a stage further to allow a more accurate/robust comparison of the XQuery by using an additional XSLT template to the input XSLT filter to add some structure to this set of tokens.

The original XQuery source (input ‘A’) used for this exercise is shown below, each recognized token-type is represented by a different foreground color, note that there are also many ‘whitespace’ tokens interspersed with the visible tokens. 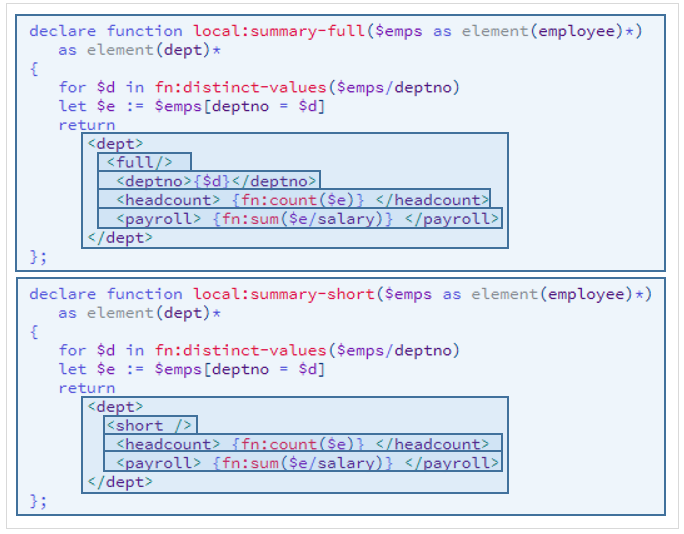 In the code above I’ve used rectangles to highlight the structure that we are going to add so that they enclose each set of tokens to be wrapped. Specifically, the language structures that we’re looking to wrap are:

The new ‘wrap-spans’ XSLT template is added to the existing XSLT filter, xquery2xml.xsl and then called from the entry-point template, as shown below:

The required output XML for this template is the same as the input XML but with added wrapper spans as shown below (there are a large number of tokens, so to save space, I’ve only shown the tokens for the first function and haven’t shown the input XML). Each wrapper span has a class attribute with value ‘wrapper, but there’s also a data-id attribute with a value that starts with ‘ey’ for an element wrapper or ‘fy’ for a function declaration wrapper. The number appended to this value is the position of the start token, I’ve added this and ‘pos’ attributes for other tokens just for diagnostics purposes (these are removed later).

In the XML above we can see that the start of each function declaration is marked by a ‘prolog’ token with the value ‘declare function’ (in practice, the whitespace separator may vary), the start of an element constructor is maked by an ‘es’ or ‘esx’ token (note that the token types used by the XMLSpectrum tokenizer do not correspond directly to the language specification for XQuery). The ‘wrap-tokens’ template uses this information to set a ‘wrap-open’ variable that detects the start of a wrapped sequence of tokens, the XSLT excerpt for this is shown below:

A ‘wrap-close’ variable is used to detect the close of a wrapped token sequence in a similar manner to ‘wrap-open’, the full code for the template is shown below:

The most important part to this template is its recursive nature, with an xsl:choose instruction used to control the recursive template call depending on whether a ‘wrap-open’ is detected and a new wrapper element must be added, a ‘wrap-close’ is detected and the currently wrapped sequence must be closed, or no open/close markers are found and therefore the current sequence should continue.

Now we’ve added some structure to our XQuery code tokens we can make code comparisons more resilient. In XQuery, the order of functions declared in the prolog is not significant, as declared functions now have a dedicated ‘wrapper’ element, we can exploit DeltaXML Core’s ‘orderless’ comparison feature (described in Comparing Orderless Elements). Orderless comparisons are performed on elements when deltaxml:ordered attributes with a value of ‘false’ are found, also, a deltaxml:key attribute can be added to elements to ensure that alignment is acheived most efficiently and reliably. We would normally use the QName for the function (represented using {uri}local-name ) and also add an arity value as the key for each function declaration, but to simplify things slightly I will use the prefixed function name only. To add these attributes we just need one further template, but because this functionality is separate to the initial token wrapping I’ll write a separate XSLT filter for this, key-xquery.xsl:

This simple template adds the required ordered=”false” attribute to the ‘pre’ attribute and then adds keys to each top-level element. All that’s left is to add this ‘key-xquery’ filter to our Pipeline Configuration file (DXP) and run the comparison, here’s the new DXP file with the added filter:

Its now time to compare this XQuery with a modified version, these are the changes I made:

And here is the result of using DeltaXML Core to compare this modified version with the original – using orderless comparison with keys: 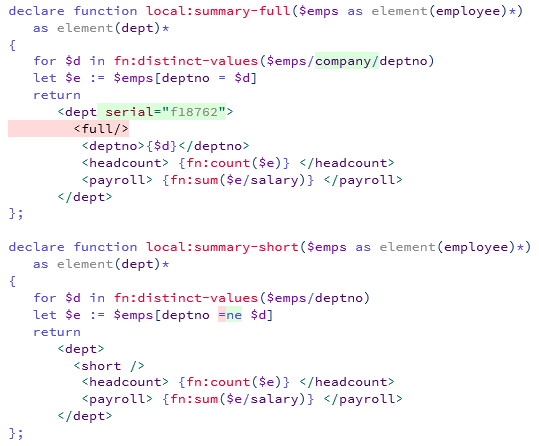 As we can see above, the changes have been marked clearly and there is no issue with the different order of the function declarations (the result shows the order of the original by default). It’s now time to look at the output from DeltaXML Core from the same input, but this time when keyed comparison is not used:

By creating a filter to add wrapper elements with unique keys to XQuery function declarations, we were able to exploit DeltaXML Core’s orderless comparison and ignore changes in the order of function declarations within the XQuery prolog – the example comparison showed that this allowed an accurate result where other comparators would fail. It would be relatively straightforward to extend the ‘wrap-spans’ template and ‘key-xquery.xsl’ filter to handle other orderless language constructs such as variable declarations.

One feature that I think could be useful would be a ‘ghost’ image showing a faint rendering of the place where the code block occurred in the other version (see below), this could probably be done best with an extra input/output filter to use a ‘placeholder’ element as a reference – hopefully I will get the chance to try this out in a further blog post.

Processing HTML5 in an XML Pipeline

We've improved how change is represented in CALS tables for DITA and DocBook. Learn more >>

For all first time users